From Surveyor to Servant: The Democratisation of the Police (With Reference to the Brandenburg Police, Germany)

The following project was written in 1992/1993 as part of my studies towards a B.A. Hons degree in Modern Languages from Coventry University. As part of the four year course, students were required to spend their third year of study at a foreign university, studying alongside native students.

At the time of researching and writing the project, I was studying politics at Potsdam University at a very interesting time in German history. Brandenburg (of which Potsdam is the state capital) was, and still is, undergoing the Wende, or Change from an area in the former East German state to a federal state, or Land in the newly reunified Germany.

I lived with students who had studied politics for two years under the Socialist system. This provided a unique opportunity to experience this change first-hand, mixing with both those who had embraced the new Germany and those who were rather more critical of the turn of events, and more importantly, those who had lived, studied and worked under both systems.

Having discussed with a German acquaintance in England the possible topics on which to base my third year project, I decided to write about the democratisation of the police in Potsdam and Brandenburg. The study was undertaken according to the guidelines set out by Coventry University, with a requirement for the inclusion of primary, secondary and personal sources.

Things will have changed of course since 1992/1993, but having re-read the project myself again only recently, it nevertheless provides an interesting contemporary snapshot of the situation at a time of great change for the German people and for the police in the new German states, who were literally making the transformation from surveyor to servant.

I graduated in 1994 with a First Class degree, so all the effort was worth it in the end!

John Chivers - December, 2010 (Taken from the foreword of the document) 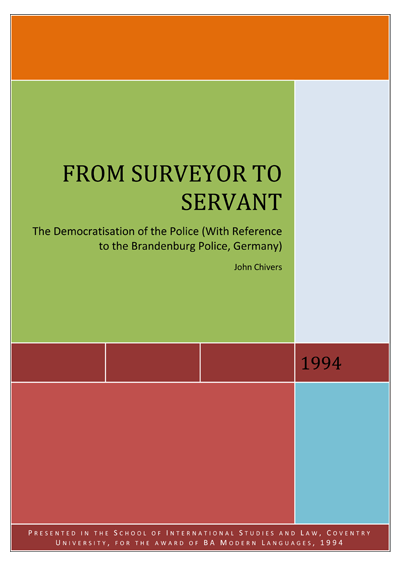