Effects of the Skiing Industry on the Environment

The following project was written in 1993 as part of my studies towards a B.A. Honours degree in Modern Languages from Coventry University. As part of the four year course, students were required to spend their third year of study at a foreign university, studying alongside native students.

At the time of researching and writing the project, I was studying at Stendhal University in Grenoble, France.

Grenoble is considered by the French to be the capital of the Alps, and as a keen skier at the time, and someone who had (and still has) a love of the Alps, I had jumped at the opportunity to study in that part of the world.

In the early 1990s, the environmental movement was starting to make serious in-roads into mainstream politics. I had a genuine interest in the ecological welfare of the planet, both on a global and a local scale, and a love of skiing. Grenoble is home to organisations which have a direct involvement in management and protection of the Alpine ecology, so it seemed like the ideal opportunity to write a project based around two of my interests, with very good research resources in the vicinity, and to see if I could reconcile my love of skiing with my emerging concern for ecological issues.

Time has moved on since 1993 and some of the horrific consequences of global warming (a pressing concern at the time of writing following a period of low snowfall over the preceding years) may not have turned out to have been as bad as predicted by some, but on reading the project through again, I am sure that much of the content is equally applicable today, nearly twenty years later; in particular where this relates to sustainable development of skiing facilities in the mountains.

I graduated in 1994 with a First Class degree, so all the effort was worth it in the end!

John Chivers - December, 2010 (Taken from the foreword of the document) 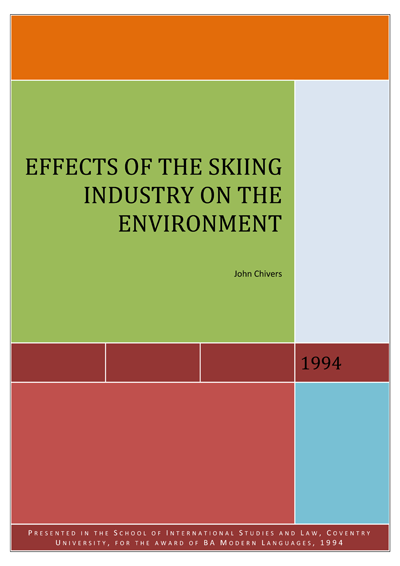